Something I never did as a student was taking notes. I just didn’t think it was cool. But things change and I now take a lot of notes. Most of them I take at work during meetings, interviews, trainings etc but my notebook is also full of spontaneous ideas, scribbles, numbers, code snippets, stack traces, quotes and other things.

Obviously I don’t carry around a pen and something made out of paper all day long. I type fast enough to protect the trees and read and write my notes digitally. When I started digital note-taking, I looked at evernote and its type of software and was shocked by the feature overload in some of these tools.

Here’s what I need from a note-taking application:

That’s it. No video, no Facebook, no Foursquare, no Twitter. Google Notebook called tags ‘labels’ and had richtext but was otherwise exactly what I wanted. It also worked on every device that supported HTML and I used it every single day. And then this happened:

This sucked. I guess when a Google application gets less than five million users they say “noone is using this” and just turn it off. And sure enough it was in read-only mode a few days later. Coming back from #gdd11, I decided to give the Google App Engine a try and implemented my own notebook within a few hours: 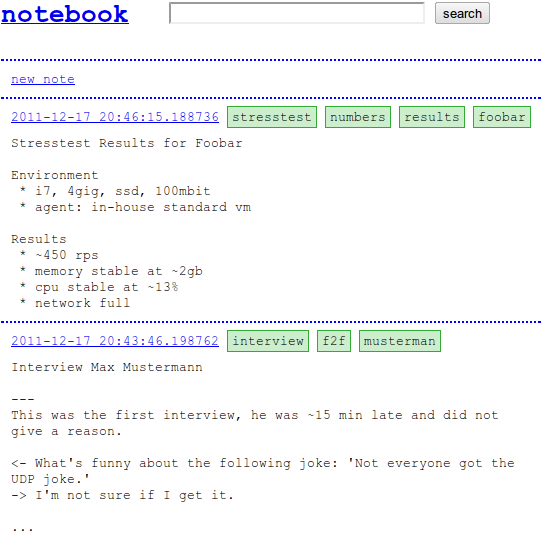 Nothing fancy but it does everything Google Notebook did for me. It works and I’ve used it every day since. Feel free to use it with your own Google account:

Also, the codez are on github, in case you need another GAE sample :)